The VIUD's KickStarter campaign finished this morning and, unfortunately, we didn't reach our funding target. While I'm disappointed, the entire experience was educating and I received a lot of great feedback to sort through. Development of the VIUD continues with the primary goal of reducing the manufacturing cost to get its retail price a low as possible.

Keep tuned to the blog for future VIUD news and development posts including a post-mortem review of the entire KickStarter experience.
Posted by Daveh at 5:33 AM No comments:

I'll be doing a Reddit AMA starting on the morning of 9 October 2014. The below image is used as proof for that thread. 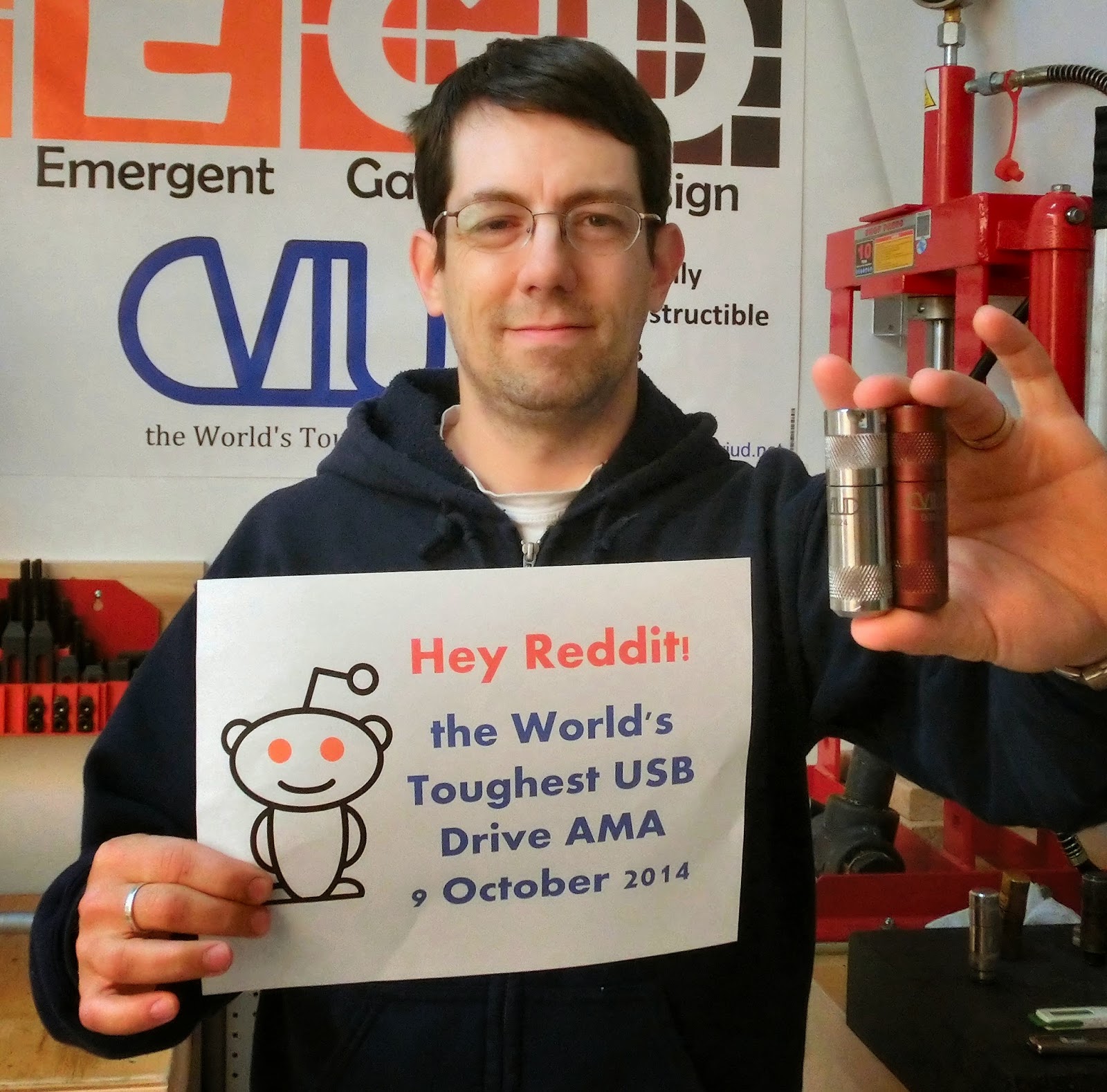 Email ThisBlogThis!Share to TwitterShare to FacebookShare to Pinterest
Labels: news

A little video about the history of the VIUD and some of the design revisions and prototypes it has been through. See it below or directly on YouTube.

Can you do this with your USB Drive (Part 2)?

A short video on something you shouldn't do with just any USB drive. See it below or directly on YouTube.

The next VIUD  video on shock, or acceleration, testing is now available! See it below or directly on YouTube.

Can you do this with your USB drive?

A quick demonstration of how tough the VIUD really is by holding it in my bare hand while in a 2000 °C flame for 30 seconds! See it below or directly on YouTube.

The next VIUD testing video on high temperatures is now available! See it below or directly on YouTube.


Keep tuned for more testing videos soon!
Posted by Daveh at 11:44 AM No comments:

My first VIUD video on pressure testing is up! See it below or directly on YouTube.


Now that I'm getting the hang of video recording and editing look for more testing related videos in the next few weeks!
Posted by Daveh at 11:53 AM No comments:

I've been busy over the last few weeks getting back up to full speed in the VIUD design and testing and there have been a few important things to note.

Most significantly, I contacted my USB circuit board supplier to check on prices and they have managed to drop by almost 50% since last year. This doesn't make too much difference on the 16/32 GB model prices but drops the final price on the expensive 256 GB by over $100!

I've started to record some videos and figure out video editing. This is definitely outside of my comfort zone but I'm having fun learning something new. Look for some new testing videos here in the near future.

I've also finally figured out and solved an issue with some USBs failing in the VIUDs after assembly. Look for a blog post on this subject in the next few days.

Last but not least, I've created an account on KickStarter and have been playing around with creating a project. I must say their web interface is one of the better ones I've used. I hope to launch the VIUD's KickStarter in a few weeks, after I record a few more test videos, so stay tuned!
Posted by Daveh at 10:37 AM No comments:

Email ThisBlogThis!Share to TwitterShare to FacebookShare to Pinterest
Labels: news

While it took much longer than I had anticipated I'm happy to say I can hold in my hand the world's toughest USB drive!


The completed VIUDs are even better looking than the individual parts and work great. I've been carrying two in my pocket for the last two months and while they are definitely on the heavy side for a USB drive they are not excessively so. There's a bit of chipping on the corners/edges of the Aluminum model which is expected and probably mostly due to the Titanium model being next to it. The Titanium model still looks flawless.

The magnetic cap works great and is strong enough to hold the VIUD to the fridge door or other metal surface as designed. I haven't tested the lanyard attachment but my initial concern of the edges being too sharp were fortunately unfounded. I've only done a quick 3000 psi pressure test so far but both test units passed easily.

Assembly of the 15 prototypes went well but did reveal a few minor design and assembly flaws:

There will have be a small break in the VIUD development this summer due to my personal schedule...who knew getting married would keep you so busy! Sometime in the fall I'll get back into more testing of the finished revision 5 VIUD prototypes to see exactly what sort of punishment they can take.

Assuming no significant design change is required (I doubt it but you never know) I hope to be able to get a KickStarter going for the initial VIUD production run later this fall. Stay tuned to the blog for the eventual announcement.

Prototype #4: The Last One?

After a long overdue wait I finally have the pieces of prototype #4 in my hands, ready for assembly, and they are looking great!

Prototype #4 has a number of design changes from the previous prototypes originating from a variety of tests, feedback, and research:


The production itself was basically flawless with only a few minor issues encountered:

Other than the smaller quantities (10 Aluminum and 5 Titanium) the production process was identical to that of the (hopefully) eventual larger order. This minimizes any surprises and gives me a good idea on the base material cost and time required for assembly.

All that is left now is the final assembly of the USB boards and epoxying before I can get back to destructively testing a few units for fun!

Prototype #4 Production: How to waste 4 months....

I haven't updated this blog in a few months as I was waiting for a small production run of prototype #4 to be completed. I only expected this to take a few weeks but it ended up being a annoyingly painful 4-5 month process.

I originally tried to get quotes from 5 different machine shops from (names have been removed to protect the guilty):

I don't understand why I never got a response back from shop #2 despite them looking like a large and reputable shop. I guess they're doing so much business they don't need to reply to quote requests although a simple "We cannot do this order for you at the moment" type reply would be nice.

I tried shops #4 & 5 as they are close in the area as me but both had issues with my material choices. I understand not wanting to work with certain materials, like Ti Grade 5, but I'd expect a machine shop to be able to source materials better than an amateur like myself can. ...or perhaps I'm overestimating how commonly Al 7068-T651 is used. Even with cheaper materials shop #4's quote is more than double that of shop #1 and 4-6 times that of shop #3.

I've used shop #1 for a large number of orders in my previous job as well as for making two pieces of the VIUD prototype #3. They produce excellent quality parts and are very easy to work with. I've always considered them as an "expensive" shop although after this episode I've warmed up to their prices...you get what you pay for after all.

Given the wide range of quotes I went with the cheapest one from shop #3....unfortunately I choose poorly. Shop #3 has a slightly different operating practice than most other machine shops. It supplies a very simple custom CAD program that you use to create designs and submit them for instant quote requests. While their CAD application is very limited compared to SolidWorks or AutoCad it works well enough and being able to get instant quotes for simple parts is very convenient. Their quotes for the parts were also far cheaper than anything else I could find by over a factor two.

While shop #3 appears to have a lot going for it they had multiple issues actually delivering them. Trying to contact an actual person is difficult and usually you end up talking with someone who can't, or doesn't, actually answer your questions. Their lead time was longer than most shops at one month but this was extended twice to two and three months without explanation.

Oh....but it gets so much worse. After finally actually completing my order of 15 pieces after 3 months there were three serious quality control issues:


I could probably live with the incorrect, and poorly made, knurling but the other two issues were a deal breaker. I know that mistakes happen in production but these parts are so simple and the mistakes so basic I'm at a loss to explain how they might of occurred. Call me crazy but I expect a competent shop to have the basic ability to make things according to the drawing, especially trivial parts like this. Coincidentally they messed up on each of three parts.

I asked, and the agreed to remake everything, but after another few weeks and several more manufacturing issues I was told they "couldn't find anyone to make it" and I had to cancel the order. The only nice thing I can say is that it didn't cost me anything...except 3 months of time.

So +3 months after placing the order for prototype #4 I had nothing to show for it. At this point it is close to Christmas which scratches off another couple of weeks before I can source and place an order with shop #1. I finally get the 15 pieces in my hands some 5 months after the initial order with shop #3.

This whole process highlights a simple wisdom I've learned over the years:

Shop #1 may not have had the best price but they are incredibly easy to work with and produce excellent quality work (the prototype #4 pieces look great). I'm looking forward to using them in the future for larger production quantities of the VIUD.