A prospective VIUD buyer recently asked me this question:


How well are the read/write times in comparison to market stock times? I have a SanDisk, but for the life of me they don't post read times, and it slows down in the middle of large projects. ... When it gets hot my progress slows down by a whole addition hour.

An interesting question that I didn't have the exact answer to. I've done a lot of basic, short-term speed testing and a couple of very long (weeks) burn-in tests for error checking, but no tests to see if the USB speed varied over a long term or to measure how hot the VIUD gets.

The basic setup was to just continually write to a VIUD over a period of about a day (continually copy a 4GB file to the drive) and do a couple of speed tests over that period to see if there was any variation. The continuous writing to the drive was paused while the speed tests were performed.

Since the original question may be related to drive temperature I also measured the temperature of the case. The tests were done for both an Aluminum (32GB) and Titanium (256GB) drive.

Results are shown the below tables.

In read/write speeds are the sequential speeds obtained from the CrystalDiskMark benchmarks. While there is some variation in the read tests it is within what we would expect the normal variation to be. The write tests show a small drop (9%) in the write speed for the Titanium drive. For the Aluminum drive the last write speed test shows a significant (36%) drop in write speed although I'm not sure I believe that data point or not as the HD Tune Pro results showed no significant speed decrease in any test for either VIUD.

I also did some quick tests on a Sandisk Extreme 16GB USB drive. Temperatures were similar to the Titanium VIUD and no speed degradation was observed.

In terms of qualitative results, the Titanium VIUD gets very warm but not uncomfortable to the touch, similar to a normal USB drive. The Aluminum VIUD gets just a little warm to the touch.

The potential reason a typical consumer USB drive might overheat and a VIUD might not can be explained by looking at the thermal conductivities of the relevant materials.


In a consumer USB drive the circuit board is surrounded by air trapped inside the case which has a very low thermal conductivity thus trapping the heat near the board and causing to it to reach a high temperature. In a VIUD drive the circuit board is surrounded by epoxy which has 10x the thermal conductivity than air which enables it to direct the heat away from the board and into the metal case and air. In addition, the VIUD drive has the USB metal connector in close contact to the metal plug which further helps conduct the heat away from the USB.

Compared to a normal USB the Titanium VIUD reached a similar temperature on the USB metal connector (37°C). How this translates to the interior circuit board temperature is unknown...we would expect the epoxy encased VIUD to be somewhat cooler than an air encased USB but by exactly how much would require more advanced temperature modeling.

The Aluminum VIUD was noticeably cooler on the USB metal connector (30°C) and would be the choice if long term reading/writing and overheating of the USB was a concern.
Posted by Daveh at 6:15 AM No comments:

The VIUD Store is Now Open!

After a month of preparation and worrying about all the little details I'm happy to announce that the VIUD store is now open at:


So go and check it out and even if you don't decide to buy anything feel free to leave me comments and suggestions!
Posted by Daveh at 12:41 PM No comments:

Last week was spent updating the VIUD specifications on the new store site which includes a number of values related to the USB (read on for an explanation of each benchmark):


The VIUD's usable capacity is slightly less than the stated capacity which is typical of just about any mass storage device. Part of the overall device's drive space is taken up by the file allocation table which takes more space on larger drives. The other part, however, is just due to the USB board manufacturer using a slightly smaller size than stated. Perhaps this is due to a technical reason or, more likely, an economic one.

HD Tune Pro is a basic disk benchmarking and testing application. Unfortunately the write tests don't seem to work on newer operating systems but the read and error tests do give a nice visual display. I'd like to point out the low minimum read speed for the 256 GB VIUD which can be easily seen in the following graph:


All other VIUD capacities have a roughly flat graph for the blue line but the 256 GB model has much slower read speeds at exactly 32 GB intervals for whatever reason.


USBFlashBench is a simple tool that tests multiple block read/write sizes and then uploads the results to a website and creates nice graphs like:

Work on creating the VIUD store started last week and I'm already well on my way to getting it finished. I decided to go with Shopify as it seems to be a good sized Canadian online e-commerce system with the features I need.

I've spent the better part of the last week taking and preparing product shots of all the various VIUD models for use in the store. There are a lot of good online guides for taking product shots but to summarize what I've used:

The shots turned out pretty good and I think they can speak for themselves! 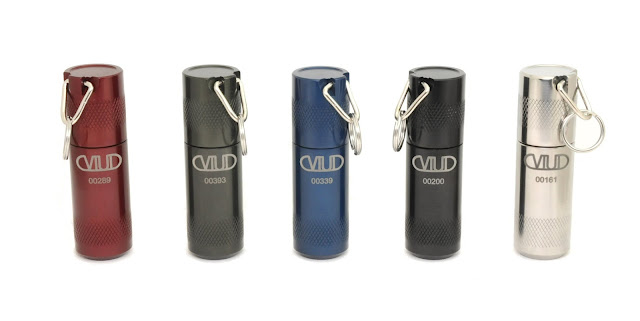 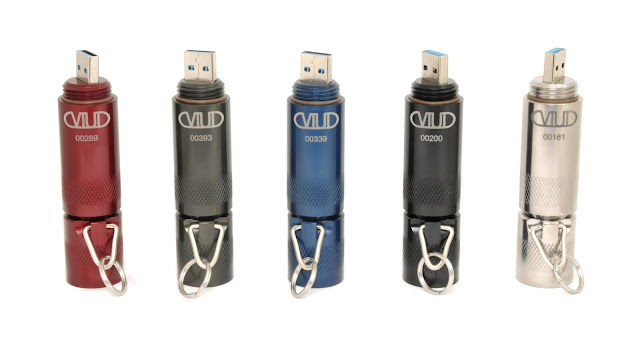 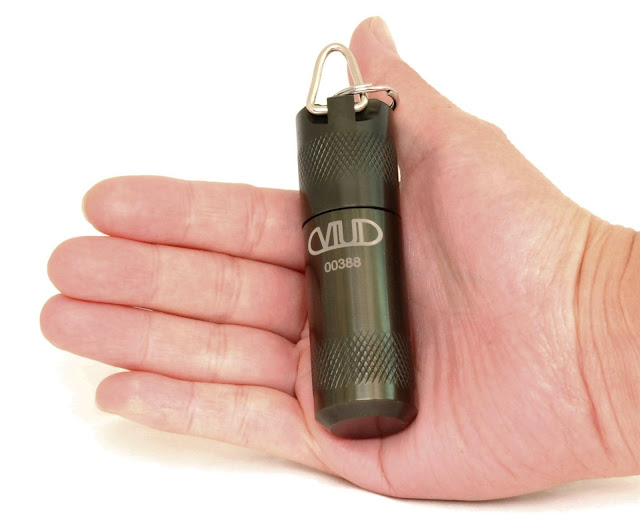 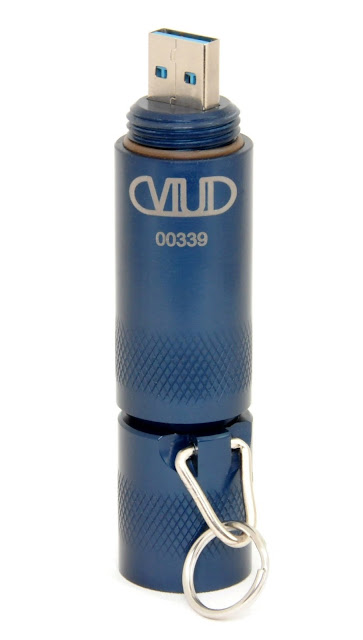 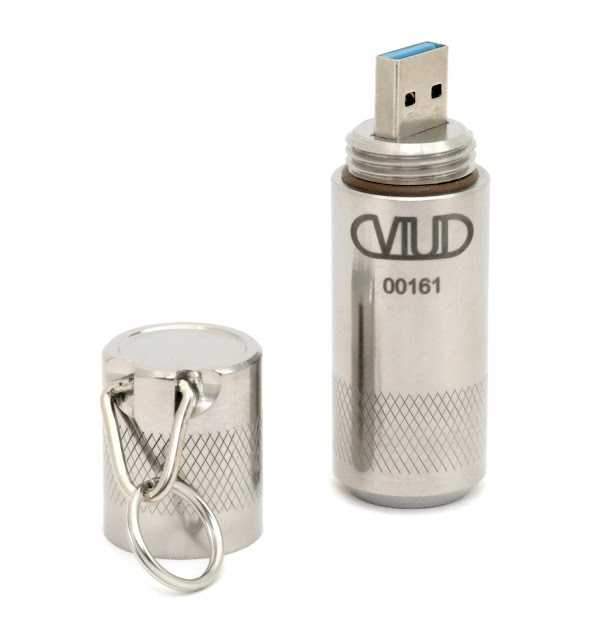 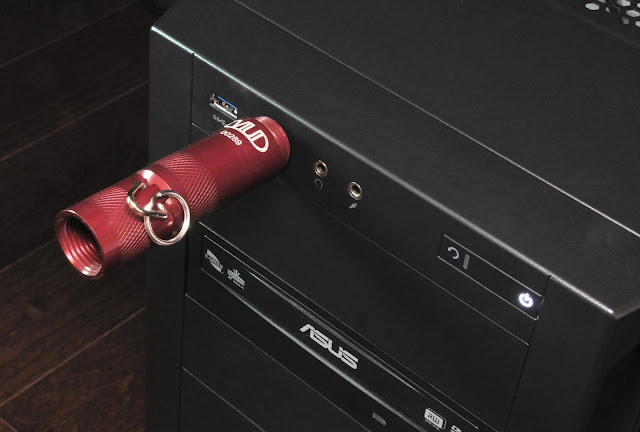 So my summer vacation is unfortunately over and I'm getting back into the finishing stages of the VIUD preparation. All I can do before actually selling them is to do the coating of all the USB boards I currently have.

Through all the various testing I've done, mainly the shock testing, I've narrowed down a good combination of coatings and epoxies that seems to maximize the durability of the USB. I start with two layers of Silicon conformal coating.


This is thin, flexible coating that gets into all the small nooks and crannies on the circuit board and even by itself seems to help a lot in minimizing damage caused by shock. Each coat requires at least a day to dry out.


Once the two conformal coatings are dry it is time for another two coatings of a thicker and more flexible insulating coating.

This gives the USB circuit board a considerably thicker and flexible coat to help absorb even more shock. It also helps prevent epoxy from leaking through the USB connector and making a considerable mess which is difficult and time consuming to clean up. Like the conformal coating each insulating coating takes a day to dry.


Next step is to just create an online store and actually start selling things!

In the past month or so I've finally managed to complete finishing the Titanium bases and have all bases laser engraved with the VIUD logo and serial number and they're looking great! 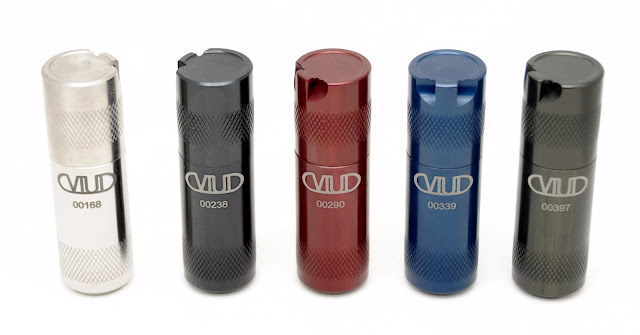 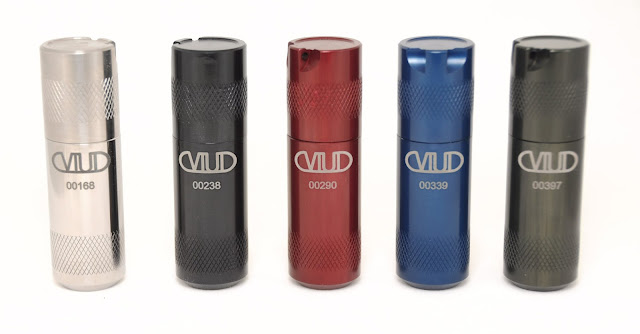 I also experimented with custom logo/text and it worked out very well but the price point to have it done is unfortunately large enough to make it only worthwhile for larger quantities (say 10 or more).


There's not much left to do! I can conformal coat all the USB boards and then find, design and setup an online store. Unfortunately, it looks as though I may be away all summer which will put another delay in the VIUD progress but it won't be long now!
Posted by Daveh at 12:52 PM 2 comments:

Its been a busy month for me in other projects, particularly with the release of the Thieves Guild DLC for Elder Scrolls Online.

Besides a little bit of label preparation the only other news to note is that the anodized cases have arrived and they look great!

Next steps are to polish the Titanium bases so I can have the VIUD logo and serial number Laser engraved. After that we are ready to start actually selling things!
Posted by Daveh at 2:35 PM No comments: